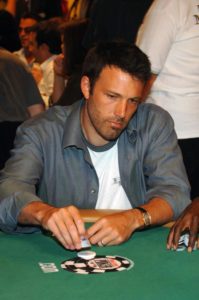 Oscar-winning American actor, director, producer, and screenwriter Ben Affleck explored the dark side of online gambling when co-starring, alongside Justin Timberlake, in the 2013 Hollywood movie ‘Runner Runner’. However, away from the silver screen, Affleck is a serious poker player. He has, however, repeatedly denied press accusations of a gambling addiction which was, allegedly, responsible for his split from his wife of 10 years, Jennifer Garner, in 2015.

In December, 2003, Affleck won $4,000 for his chosen charity, A-T Children’s Project, when finishing third, of six celebrities, in the World Poker Tour (WPT) Hollywood Home Game IV at the Hollywood Sound Stage, but failed to win a $25,000 buy-in to the WPT Championship, which was the first prize. Nevertheless, the following June, Affleck beat a field of 90 players, including fellow actor Tobey Maguire, to the $356,400 first prize in the California State Poker Championship. That victory did earn him a seat at the WPT Championship the following April, but he failed to win any of the $10,961,000 prize money on offer at Bellagio, Las Vegas.

More recently, Affleck, along with other celebrities, including Maguire, Leonardo DiCaprio and Matt Damon, is rumoured to have been involved in the illicit, high stakes poker games run by former cocktail waitress Molly Bloom – dubbed the ‘Poker Princess’ – at ‘The Viper Room’ nightclub on Sunset Trip in the late Noughties. The 2017 movie ‘Molly’s Game’, starring Jessica Chastain as Bloom, is loosely based on the goings-on at the secretive, $50,000 buy-in games.