The contemporary casino is more than a gambling destination: it is a multifarious pleasure enclosure intended to satisfy every member of the family unit – Colson Whitehead 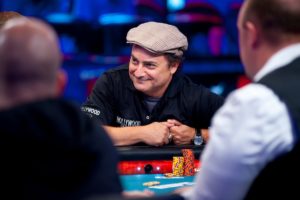 California-born actor, comedian and impressionist Kevin Pollak is famous for his roles as Lieutenant Sam Weinberg in ‘A Few Good Men’, Todd Hockney in ‘The Usual Suspects’ and Philip Green in ‘Casino’, among others. However, in the world of poker, Pollak is best known for his deep run at the World Series of Poker (WSOP) Main Event in 2012 – his first ever appearance in the WSOP – when he exceeded even his own expectations by finishing 134th of 6,598 entrants and collecting $52,718 in prize money.

Indeed, the 2012 WSOP Main Event was also memorable for the bad beat Pollak suffered at the hands of Kirill Rabstov on day five of the tournament; both players went all-in pre-flop with pocket queens, but Rabstov hit a backdoor flush draw on the flop and hit his suit on the turn and the river, while Pollak watched, helplessly, hands on head. Far from discouraged, Pollak has since played regularly in the WSOP Main Event and, although he has yet to better his 2012 finish, in 2019 he broke off filming ‘The Marvelous [sic] Mrs. Maisel’ in Brooklyn, New York and took his seat at the Rio All-Suite Hotel & Casino in Las Vegas straight from the airport.

A lifelong poker player – or, at least, since the age of 10 or 11 – Pollak started playing more seriously at the Mirage and the Riviera in Las Vegas during filming of ‘Casino’ in 1994. He still plays, weekly, in a Hollywood home game that he has been running since 2010, in some smaller buy-in events in Los Angeles and in charity events.