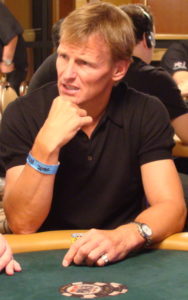 Retired striker Edward ‘Teddy’ Sheringham enjoyed an illustrious career with six different football clubs, including Tottenham Hotspur and Manchester United, and with the English national team. However, some years before he finally retired as a player in 2008, at the age of 42, Sheringham had started playing live tournament poker. He made his debut in that sphere on home soil in 2005, finishing second at the Fahrenheit Festival in Southend-on-Sea, Essex and third in the 888.com Pacific Poker Open in Maidstone, Kent, for cashes of $7,230 and $20,000, respectively.

Other major cashes over the years have also included $66,738 for a fourteenth-place finish in the World Series of Poker Europe (WSOPE) Main Event at the Empire Casino in London in 2009 and $28,530 for finishing 388th in the World Series of Poker (WSOP) Main Event at the Rio All-Suite Hotel & Casino in Las Vegas in 2012. However, Sheringham enjoyed his biggest payout, so far, in between times; he reached the final table, which also included the likes of WSOP Main Event winner Martin Jacobson, in the the European Poker Tour (EPT) Main Event at Casino Vilamoura in Portugal in 2010, eventually finishing fifth and collecting $118,346.

All told, Sheringham has nearly $330,000 in live earnings to his name. He has been less active on the poker circuit in and around London, and elsewhere, in recent tears, but remains one of the few celebrities who have translated love of the game into real, tangible results against some of the best players in the world.