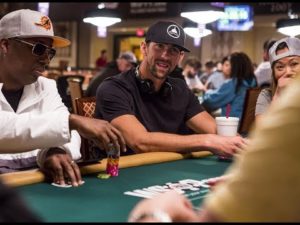 Maryland-born Michael Phelps, a.k.a. ‘The Baltimore Bullet’, is the most decorated Olympian of all time, with 28 medals, 23 of them gold, for long course swimming. However, Phelps was playing poker long before his retirement from competitive swimming following the 2016 Summer Olympics. In 2006, while living in Ann Arbor, Michigan, Phelps met professional poker player Jeff Gross at Casino Windsor, now Caesars Windsor, in Ontario, Canada and the pair subsequently room together for seven years in Baltimore, Maryland. Gross called Phelps ‘one of the best celebrity players around’.

Phelps actually achieved his best live cash, so far – a ninth-place finish, worth $5,213, in a World Series of Poker (WSOP) Caesars Palace Classic event in 2008 – before his retirement. Indeed, at the time of his retirement, it was speculated that he may play more frequently in live poker tournaments and may, indeed, sign a major sponsorship deal. So far, no sponsorship deal has been forthcoming but, in recent years, Phelps has finished in the money at a handful of smaller poker tournaments at various Las Vegas casinos, including The Venetian, Aria and Rio. All told, Phelps has just $9,873 to his name in live earnings but, most recently, finish fifth of 54 entrants in the $110 + 30 No Limit Hold’em – Nightly Event at the Aria Resort & Casino. Poker remains a hobby, rather than a career, for Phelps, but there is little doubt that he is a serious, talented player.