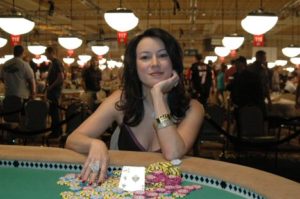 Oscar-nominated actress Jennifer Tilly is perhaps best known, nowadays, as the voice of Bonnie Swanson in the Fox animated sitcom ‘Family Guy’. Born in California, but raised in British Columbia, Canada, Tilly was formerly married to the late Sam Simon – co-creator of ‘The Simpsons’ and also a highly accomplished poker player – between 1984 and 1991. However, Tilly became serious about poker in the mid-Noughties –unsurprisingly, not long after meeting long-term partner Phil ‘The Unabomber’ Laak at the World Poker Tour (WPT) Invitational, at the Commerce Casino in Los Angeles in 2004 – and has since accumulated just over $1 million in live earnings.

Tilly won her first WSOP bracelet in the $1,000 Ladies Only Event at the Rio All-Suite Hotel & Casino in June, 2005, and followed up that victory with another, in the WPT Ladies Night event at the Bicycle Casino in Los Angeles. Tilly admitted that, early in her fledgling poker career, she was more interested in playing the game but, in late 2008, announced that she would, in future, treat poker ‘more like a hobby’.

Nevertheless, she returned with a bang when winning Bellagio Cup VI at Bellagio, Las Vegas in July, 2010 – and with it $124,455, her second-best live cash ever – and has been a regular participant in high-stakes events, at home and abroad, ever since. Indeed, her best live cash since her return from ‘retirement’ was the $98,000 she collected for a seventh-placed finish in PartyPoker Premier League VI at Aspers Casino, London in March, 2013.